His compositions have been performed both nationally and abroad by many leading artists, ensembles and orchestras. He has a particular interest in opera, and his first opera, The Fisherman, was premiered to wide critical acclaim in a production for the London International Opera Festival. Opera Magazine described Paul as ‘our latest operatic prodigy’. His most recent full-length opera is an adaptation of Federico Garcia Lorca’s Blood Wedding in the translation by Ted Hughes. In 2013 he completed an operatic monodrama, Frida, a setting of the diaries of the Mexican artist Frida Kahlo. Recent commissions include a new work for Sarah Connolly (Wigmore Hall, 2014), the UK Society of Recorder Players (Kings Lynn, 2015). In 2015 he completed a new work for orchestra, Five Illusions. In 2016 he succeeds Cheryl Frances Hoad as Composer in Residence for London Chamber Orchestra’s Music Junction programme. 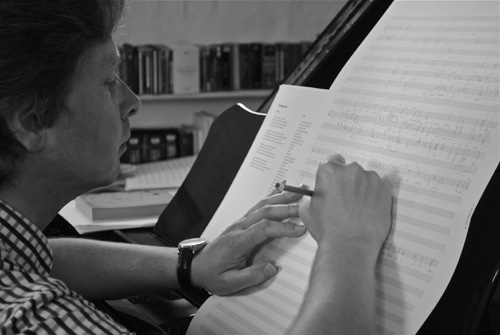 Edlin’s works have received broadcasts on BBC 2, BBC Radio 3, as well as on Radio and Television abroad.

He was a founder member of the Artistic Group of Sounds New Contemporary Music Festival, of which he was Artistic Director from 2007 to 2013, a period in which it flourished. In 2005 he was asked to become Artistic Director of the Deal Festival of Music and the Arts, following on from the cellist Steven Isserlis and composer David Matthews. He stepped down in 2010, but was once again asked to return to this role in 2014.

He has many years of experience in university lecturing and teaching and is currently Director of Music at Queen Mary University of London, one of the country’s leading universities and in the Top World 100 (THE 2015). Formerly, he was Professor of Music at Canterbury Christ Church University from 2009 to 2012 having worked there in a series of roles for almost thirty years. In 2011 he was elected President of the Incorporated Society of Musicians.

As a conductor, Edlin tends to focus on contemporary repertoire. He has conducted many premieres of new works as well as UK premieres of such pieces as Beat Furrer’s Ensemble II and Ernst Krenek’s Sestina. In 2010 he conducted the National Philharmonic Orchestra of Malta, allowing him an opportunity to explore the more romantic repertoire of Puccini and Verdi. As a trumpet player, he particularly enjoys the ‘clarino’ repertoire of Bach, Handel and Purcell and has played in many performances of works such as the B Minor Mass, Christmas Oratorio, etc.

Paul Max Edlin studied at the Royal College of Music (composition with Edwin Roxburgh, Richard Blackford and Joseph Horovitz; trumpet with John Wallace and Richard Walton, and conducting with Christopher Adey). He has won many composition prizes including the IX Premio lnternazionale Ancona. He received a Leverhulme Studentship for further postgraduate study at the RCM. He continued his studies with Michael Finnissy at the University of Sussex where he took his doctorate.

A Fellow of the Royal Society of Arts and a Fellow of the Incorporated Society of Musicians, he has served on the boards of several music and music education organisations and charities, including Cantoris Charitable Trust, which supports Canterbury Cathedral choristers. He is Chair of the Board of Ora, one of the UK’s most prestigious vocal ensembles, and he sits on the board of the newly formed East London Music Group. Paul Max Edlin has two musical sons. Peter, an artist, photographer and designer, plays lead guitar in the progressive rock group The Boot Lagoon, while Timothy is a bass-baritone.